Many of the readers of this article have probably grown up and lived a large part of their lives with the belief that butter is bad and unhealthy and that margarine is good, and that red meat is absolutely out of the question and should be replaced with only lean meat. 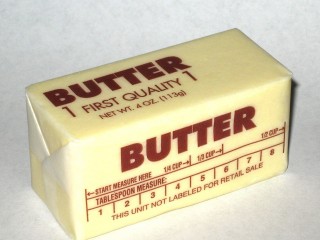 The anti-butter hysteria was fueled by numerous articles and publications, as well as certain promotional and advertising media.

For all people who have been avoiding spreading some nice old butter on their morning toast for decades, the truth has finally come out – neither butter, nor high fat dairy or high fat meat are the cause of high cholesterol levels in the blood and thus for coronary diseases, strokes and heart attacks.

Today, more scientists, journalists and nutritional experts agree on the fact that this high fat avoidance hysteria was all based on very poor if little evidence for the health dangers these foods pose.

On the contrary, they claim that since the 1970’s when this anti-fat movement actually started, food producers began producing more and more low-fat products, which it turns out were even more harmful because of the added sugar and other additives used for improving their taste.

In fact, according to a publication in the Annals of Internal medicine from March 2014, eating less saturated fat does not reduce the risk of coronary disease.

Just a week after this publication, an op-ed article in the New York Times came out with the claim that “butter is back” and it started with the sentence that the “Goddess of butter and fat, Julia Child is probably beaming somewhere.”

According to the Department of Nutrition of the Harvard School of Public Health, it is a fact that by substituting what were considered bad fats with simple carbohydrate foods has cause greater risks and has caused even more harm to our bodies in the long run. The problem which nutritional specialists realized several decades later was that the low-fat foods were loaded with sugar and the refined carbs had an effect on the human bodies and health which nobody at the time knew about. These carbohydrates caused insulin spikes, which caused obesity, diabetes type II, plus an increased risk of heart disease.

» Why low-carb is better than a low-fat diet?

Finally just today have scientists and nutritionists realized that it is not the nutrients of the food which matter but rather the food itself is important – and it should be less processed, whole and nutritious in order to be healthy.

Now there is scientific proof that there are some high-fat foods which are not only healthy, but can be considered super-foods because of the beneficial effect they have on the health and body.

The first healthy high fat food which we will be noting is butter made from grass fed cows. Demonized for the past several decades, it contains some essential nutrients, including: vitamin A and Vitamin K2, plus fatty acids which are known to fight off and prevent a number of health conditions. Even though butter is very high in saturated fact, studies have shown that populations of countries and areas where more high fat butter was consumed are less prone to developing cardiovascular disease, and also are at a lesser risk of obesity.

Extra virgin olive oil, as you probably know is the central component of the famous and healthy Mediterranean diet. It is another one of those high fat superfoods which we recommend because of the wide variety of health benefits it offers. Good quality and real virgin olive oil offers a good supply of vitamin E and vitamin K, plus a number of powerful antioxidants which help fight away inflammations, reduce the bad LDL cholesterol levels and keep them from being oxidized. It has been proven by a number of studies that the regular intake of virgin olive oil reduces the risk of cardiovascular disease, and deaths related to heart disease.

The next in the line are avocados. Although a medium sized avocado contains an average of 23 grams of fat, this super fruit is stacked with mainly monounsaturated “healthy” fat called oleic acid, which is known to have a number of health benefits. The avocado is an excellent source of potassium and will provide about 40% of the recommended daily fiber needs of the average person. The avocado is natural, and contains no sodium or cholesterol, whilst it has enough lutein to offer a bunch of health benefits. The avocado can be eaten instead of butter or spread for a sandwich or potato, in guacamole, or in a number of healthy and delicious recipes for salads, meals and deserts.

Another type of high fat foods which are very healthy when consumed in moderation are nuts. Snacking on nuts, especially on raw and unsalted ones can lower the bad LDL cholesterol levels in the blood, and thus decrease the risks of stroke, thrombosis and heart attacks. They are natural providers of protein and fiber which helps reduce triglycerides and LDL cholesterol levels in the blood. Nuts also contain high amounts of magnesium and vitamin E. The healthiest nuts are: walnuts, almonds, macadamia and a number of others. Eating ¼ of a cup of healthy nuts a day will literally help you keep the doctor away.

Cheese is one of those foods which generations of people have been avoiding and missing because of the low-fat diet recommendations we were all exposed to for years.

It turns out though that we can say hello to Brie and Parmesan again, because cheese is one amazingly nutritious and healthy super food. It is rich in calcium, vitamin B12, phosphorus, selenium, and is very rich in protein. Just a small slice of cheese contains the same amount of healthy protein as a glass of milk. Cheese contains fatty acids which are known to help reduce the risk of developing type II diabetes and other serious health conditions.

Dark chocolate is another high fat superfood, which offers a number of different health benefits when consumed regularly and in moderation. An ounce of black chocolate contains nine grams of fat of which almost half are from the unhealthy saturated type, but nevertheless it contains healthy fats as well which as we know provide a number of health benefits. The dark chocolates with higher cocoa content (of more than 70%) contain higher levels of the great antioxidants known as flavonoids, and have even more antioxidants than blueberries. Plus, each piece of dark chocolate is an excellent source of healthy fiber as well. Good quality dark chocolate also contains iron, copper, magnesium, manganese and iron too. A study found that people who consume moderate quantities of dark chocolate five or more times per week are less likely to die from a heart related disease as compared to those who don’t. Other studies have found that dark chocolate can help improve the brain function, and provide more protection for the skin from the harmful sun exposure too.

Of course, to be able to benefit to the maximum from the superfood qualities of dark chocolate, make sure you purchase a good quality one with cocoa content of at least 70%. 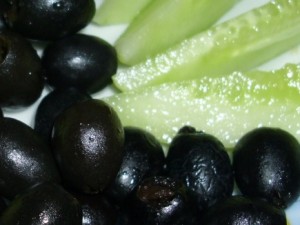 Black olives are another excellent high fat food with a wide variety of health benefits. Black olives are known to help prevent cancer because of their high content of hydroxytyrosol, which also helps reduce bone loss.

Black olives are also great for people with allergies as they provide natural anti-histamine functions to the human cells. They can be high in sodium, so as with all other high fat foods in our list, you should watch the quantities and look for the quality. A recommended dose of five large or ten small black olives per portion is perfect.

Foods, like whole eggs, butter and bacon, have been perceived as enemies to the health and threats for the cholesterol levels for decades. Now though, studies are revealing that whole eggs and namely the egg yolk is an almost perfect food, which contains nearly any nutrient necessary for the functioning of the human organism. Eggs are high in protein and are loaded with minerals and vitamins. One whole egg has 212 grams of cholesterol, but as recent studies have shown this cholesterol rarely has an impact on the cholesterol levels in the blood. Whole eggs are weight loss friendly as well, and are known to be an excellent replacement from a grain-based breakfast.

The other “magic” high fat food which offers a wide variety of health benefits is fatty fish. Salmon, sardines, mackerel, herring, trout and other fatty fish are excellent sources of omega-3 fatty acids, proteins of the highest quality and a number of other essential nutrients. Fatty fish is found to reduce the risk of cardiovascular disease, depression and dementia.

Full-fat yogurt is also a great high fat food, which contains a number of important nutrients and is filled with healthy probiotic bacteria which help maintain the healthy bacterial balance in the intestines and has an overall great effect on the health.

Full fat yoghurt helps prevent heart disease and obesity, but you must make sure it is full fat, rather than the low fat versions which to compensate for the taste are filled with sugar.

Ground flaxseed is also packed with fat, but one or two tablespoons of this magic superfood will provide your body with all the healthy nutrients necessary to reduce inflammation and help the health of the heart and the brain. The omega-three fatty acids in the flaxseed are great antioxidants, and flaxseed is known to contain more than 800 times lignans than any other plant food. This can help prevent the development of certain types of cancers.