How much seafood should we be consuming in order to get sufficient amounts of EPA and DHA to be able to use the benefits provided by omega-3 fats found in seafood? 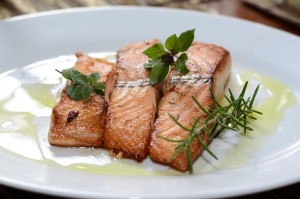 Research shows that through the ages, the ratio of consumption of omega-3 and omega-6 has changed drastically. While our hunting and gathering ancestors were supposedly consuming them in a ratio of 1 to 1 when there was an abundance of a variety of seafood, today after the agricultural and industrial revolution, we tend to eat much more omega-6 acids, because of the decrease of seafood and the increase of grain production, the cereal grain used for livestock feed and the vegetable oil industry and production. This means that our ancestors probably didn’t suffer from the modern diseases including: heart disease, diabetes and cancer which are among the leading causes of death in the Western world today.

The fact is, that omega-3 is 100% found in certain fish and seafood, and then 57% in flaxseed, followed by a small percentage of lower than 10% in walnuts, soybeans and canola, while omega-6 is found in safflower, sunflower, corn, peanuts, soybeans and others in large quantities.

So, now think about the ratio in which you consume vegetable oils and that in which you eat seafood, and in the typical case of a typical western diet, you will realize that it is stunningly different, and according to some studies in the US the ratio has grown from 8.4:1 from the 1930’s to nearly 25:1.

This entire shift in the proportions matters because the n-6 and the n-3 fatty acids actually compete for the enzymes they need for conversion in the human organism, which means that the omega-6 fatty acids actually hinder the long-chain of the omega-3 EPA and DHA which are crucial for protecting our bodies from inflammation and disease.

Unfortunately, studies show that the concentration of n-6 fat in the human tissue of the average American is a shocking 75%, which creates a highly inflammatory environment, eminently leading to serious and fatal diseases such as heart condition, diabetes type II, irritable bowel syndrome, metabolic syndrome, arthritis, asthma, obesity and cancer.

So, after these scary statistics, the answer to the question about how much seafood and omega-3 fatty acids we should consume to stay healthy is – as much as possible, so that it is able to “neutralize” the n-6 fat in the tissues. This will reduce the risk of inflammation and development of serious diseases.

In fact, the leading pharmaceutical companies have based their anti-inflammatory products, including: Aspirin, ibuprofen and Celebres based on their reduction of the resulting inflammations from the omega-6 fatty acids in the human tissues.

Another more natural way to reduce the concentration of n-6 is to reduce the intake of the food products which have high contents of Omega-6 fatty acids.

The problem with the dangerously high intake of omega-6 fat is especially serious in the US which is at the top of this list.

The good news is that by decreasing the concentration of n-6 and the ratio of n-6:n-3, the risk of these dangerous health conditions and diseases is reduced. In fact, a study proved that just by replacing corn oil with canola or olive oil, the ratio was lowered to 4:1 and thus decreased the mortality rate up to 70%.

So, keep in mind that inflammation is the leading cause of almost all diseases and to the high mortality rates resulting from these illnesses and that it can be regulated with a proper diet.