You have probably all stumbled upon and some of you may have even tried the popular natural supplements for enhancing sexual performance in men. The good ones are actually all-natural and truly contain what they claim to contain: all-natural herbal extracts, vitamins, minerals and no chemicals.

Some of the most popular of these compounds are proven to have an actual positive effect on improving sexual performance, enhancing the libido of men, ensuring firmer and more enduring erections and in some cases even improving the sperm count and motility, allowing for a higher fertility rate.

Here is a short list of some of the most common compounds of the natural sexual enhancement supplements on the market:

An amino acid found in lobsters, shrimp, crabs, spinach, seaweed, salmon, chicken breast, and other foods, L-arginine is essential for the production of sufficient amounts of nitric oxide in the body, which is the chemical responsible for opening the blood vessels inducing increased blood flow into the penis, thus allowing the man to get an erection.

L-arginine actually relaxes the muscles of the penis and this leads to the proper dilation of the blood vessels and a better flow of blood in the sexual organ. So, basically, the amount of L-arginine in the organism will define the quantity and quality of the erections a man can get and sustain.

Another benefit of L-arginine for the male reproductive system is the fact that it stimulates the production of hormones by the pituitary and thymus glands, which regulate the production of sperm as well. Thus, apart from boosting sexual performance, this amino acid also increases the fertility of men.

This natural component is also known to benefit the increase of muscle mass, helps regulate blood pressure and boosts the immune system.

L-arginine is one of the most commonly fount compounds in the natural sexual enhancement and fertility boosting supplements.

L-phenylalanine is naturally found in protein rich foods, but is often taken as a supplement or is a compound in the natural supplements offered for enhancing sexual performance and improving the fertility in men as well. It is also used as a pain reliever, stress reducer and mood elevator.

L-phenylalanine is converted into tyrosine (an amino acid) by the human organism, which is then converted into a neurotransmitter – a messenger from the brain, and then turns into dopamine and norepinephrine responsible for elevating the mood, reducing stress and improving memory. It is known to increase the production of phenylethylamine, which is the neurotransmitter responsible for the libido and romantic feelings. L-phenylalanine is known to resolve problems of people who are depressed or for some other reason have lost interest in sex and have a lowered libido. 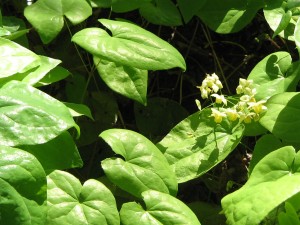 Apart from its other health benefits, such as improving kidney function, relieving asthma and osteoporosis, Epimedium is used as an aphrodisiac, a libido booster and sexual enhancer for men. This herb is known to help resolve erectile dysfunction problems, premature ejaculation, and an increase of sexual desire. The reason for its positive effect on male sexuality is that it contains icariin – one of the flavonols used to treat impotence and sexual dysfunction.

Maca is a plant which is grown in the beautiful Andes Mountains in Peru, and has been known to have aphrodisiac qualities and to improve fertility in men immensely.

Maca is also famous for its ability to enhance sexual performance and increase the libido in men. It is definitely found to increase sexual desire in men.

Maca also has a positive effect for female sexuality, and helps decrease the side effects of the menopausal hormonal changes in women, decreases menstrual symptoms and generally helps balancing the hormones in women.

Niacin is part of the Vitamin B complex, which is naturally found in poultry, fish and whole grains. Niacin improves the processing of fats in the body and thus decreases bad cholesterol levels. By helping reduce cholesterol which clogs up in the blood vessels, Niacin stimulates the dilation of the blood vessels of the penis and thus allows for a bigger blood flow in the corpus cavernosum (the spongy cylinders in the penis which when filled with blood make an erection possible), and allows the erection to be stronger and more durable as well. This is why Niacin is another one of the popular natural components used to make the all-natural sexual enhancing supplements available on the market.

Vitamin B6 is another nutrient, which is part of the Vitamin B complex, and is crucial for the proper functioning of the enzymes and the production of male hormones, including testosterone. Testosterone is essential for the proper sexual functioning and sperm production in men. Vitamin B6 is also known to reduce stress levels in men and women, and stress is one of the main psychological reasons both for infertility and for sexual dysfunctions in men. Vitamin B6 also improves the mood by being an active participant in the production of dopamine and noradrenaline in the human body as well.

Saw Palmetto is extracted from the so-called “cabbage palms” which grow in the Southeastern US states and the Sea Islands. Saw Palmetto has a positive effect on male sexuality and is also a popular compound of the natural sexual enhancing and fertility boosting supplements available on the market.

It was used as an aphrodisiac back by the Native American Indians and Mayans. Used as a cure for impotence and fertility enhancer, Saw Palmetto is a wonderful natural aphrodisiac. It has some additional health benefits for men as well. It is known to reduce enlarged prostates in the common condition known as Benign Prostatic Hyperplasia (BPH) as well, which makes urinating easier and less frequent. Saw Palmetto has also been found to have a beneficial effect on hair loss in men.

Ginkgo biloba is also a herb originating from ancient China, and is used for a variety of health benefits it has – from improving the memory to increasing the libido.

There is actual scientific evidence, which has concluded that Ginkgo biloba extract has a positive effect on the sexuality of men who are suffering from sexual dysfunction as a result from taking antidepressants. Ginkgo Biloba improves the blood supply to the penis, and thus is found to improve the ability to get and sustain an erection. It has been found to have a positive outcome in nearly 80% of men, and can successfully resolve some issues causing impotence.

In fact, Ginkgo biloba has a good effect on sexual sensations of both men and women. It is a common ingredient to the sexual enhancement supplements available.

Originating in the Amazon basin area, guarana has been used in Brazil and Venezuela as a sexual stimulant for ages.

Guarana is actually a delicious fruit, which contains caffeine, and acts as a stimulant to the muscles, heart and central nervous system. In fact, guarana seeds have more caffeine than coffee seeds. These seeds also contain high levels of tannins and alkaloids, which increase stamina and improve the libido.

Now, guarana seeds are used in energy drinks and other products, but are often included in the all-natural sexual enhancement supplements as well. By enhancing the mood and improving the stamina, guarana seeds help increase the libido and resolve problems with the sexual functioning in men caused by depression, such as erectile dysfunctions.

A plant originating from India, Withania somnifera is mainly grown for its root, which is known to be an excellent natural remedy for panic disorders, as a stress reliever, and is a common component of the all-natural aphrodisiac supplements available.

Withania somnifera root extract boosts the male libido and sexual performance, especially for men whose sexuality has been affected by aging. By reducing stress, this wonder herb not only helps enhance sexual desire and performance, but is also known to increase fertility both in men and in women.

A tree found in Southeastern Asia, the Eurycoma longifolia has also been used as an aphrodisiac by men in Malaysia and the region for ages. The extract from the bark and roots of this tree is a common component in the natural sexual enhancement supplements.

Eurycoma longifolia has been used to treat erectile dysfunction, increase sexual desire, as well as for the treatment of other health conditions, such as hypertension, fever, tuberculosis, syphilis and even certain types of cancer.

The effect of Eurycoma longifolia on male sexuality is caused by the strong effect it has on the production of testosterone in the male body.

Actually, it is a fact that Eurycoma longifolia increases the libido of up to 90% of both men and women.

Curculigo orchioides, also known as “Kali Musli” is another plant originating in India, which is known to have both aphrodisiac and estrogenic effect on humans. This rare herb has a special place in Ayurvedic medicine and helps improve the sexual performance of men by enhancing the penile erections, the length of sexual performance, delays ejaculation and has an overall positive effect on the libido.

Curculigo orchioides is also known as a natural antioxidant and is an immune system booster, helps people with diabetes and even some forms of cancer.

These are some of the most common ingredients you will found listed on the sexual enhancement and fertility boosting natural supplements’ recipes which have become ever so popular. Always keep in mind though, that if you are taking prescription drugs or have certain health conditions, some of these natural components may intervene with the pharmaceuticals or may lead to certain side effects and worsening of the health problems, so always seek the advice of your doctor, if you are planning to take such supplements and you have underlying health conditions.