The growing fad among parents to stop their babies and children from being vaccinated has just turned into an even more serious problem and phobia because many of these parents are protesting against simple vitamin K shots which are given to newborn babies against dangerous internal bleeds. This, as you might imagine is not the best idea in the world. A simple vitamin shot can actually save a baby’s life, and yet parents are refusing it because they believe in the conspiracy theories about all doctors being incompetent and evil, and that the pharmaceutical companies are actually trying to harm babies and children…

The truth is that vitamin K is essential for the human organism, and despite the fact that it i 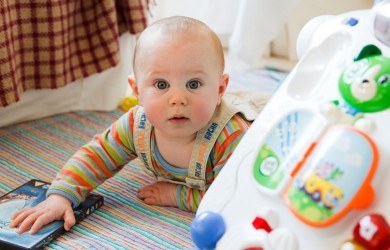 s found naturally in certain green leafy veggies, it is also believed to be produced in the human gut too, but this isn’t the case with newborn babies. In fact with newborns, this vitamin cannot be transferred via breast milk, so getting this vitamin K shot could be crucial for them. The thing is, this essential vitamin helps the clotting of the blood and can constrict and prevent internal bleeding in newborns, which can occur in the digestive system, the brain or any organ of the body and often is fatal. After several cases of babies diagnosed with asymptomatic internal bleeding resulting from vitamin K deficiency were reported – it was revealed that all of their parents had refused the vitamin shot before that. Even though, thankfully all the babies survived, the dangerous condition was easily preventable.

Vitamin K deficiency bleeding (VKDB) can occur right after birth or up to 6 months after the birth of the child with no warning symptoms, and the results could be devastating.

A study has found that the number of parents who are refusing the vitamin K shot is growing, and that there is a strong intersection between the anti-vaxxers and these parents.

The most obvious possible reason for this unreasonable behavior is that expectant parents are not made aware of the risk of VKDB and of the importance of getting this preventive vitamin K shot for their babies.

The risk of internal bleeding occurs in five to seven of every 100,000 newborns who have not received the shot. Unfortunately, the statistics show that 20 percent of them die, and 50% suffer from long-term brain damage.

One of the leading reasons why parents are refusing to get these life-saving shots for their babies is all the talk and discussions and conspiracy theories which we all have stumbled upon in the Internet.

There are also a number of Internet forums and blogs which are manifesting their belief that vitamin K shots could be dangerous and could lead to psychological trauma, infections and a number of other health problems.

The fact is, that expectant or new parent should be informed of the risks of this vitamin K deficiency bleeding occurring, and should really consider and prioritize the consequences of the baby being traumatized by a simple shot and those if the baby suffers from a serious brain hemorrhage…

Unfortunately, more parents seem to be taking the no-shots approach, even though the vitamin K injection is not a vaccination.

The people rallying against these vitamin shots are citing an old and single study which claims that vitamin K injections could be related to leukemia, but no further evidence of such a correlation has been found since.

Yes, sometimes medical interventions can cause some harm, mistakes can be made even by the best medical professionals, but surely your doctor should be able to answer all your questions and any doubts you may be having about your baby receiving a vitamin K injection, or any other shot for prevention of dangerous diseases.