Many couples who are trying to conceive but are using some sort of lubricant for sexual intercourse could be making a great mistake without even realizing that there are certain lubricants, which can actually kill the sperm and apart from that can lead to bacterial infections for the woman.

Vaginal dryness is a common occurrence when the sexual intercourses are “timed” based on the ovulation calendar, and when the couple has sex without the woman being properly aroused. This leads to a lowering of the arousal for the man as well, and thus a lower chance of ejaculation, which may lead to the ejaculation of no or insufficient amounts of sperm.

Such couples must be aware that there are natural sperm-friendly lubricants they can use, as well as the especially formulated ones, which are produced as safe for couples trying to conceive.

In fact, the majority of people probably have most of these perfectly safe and natural lubricants, which could be used for sex by couples who want to make a baby, in their kitchens.

Egg whites are one of the best natural lubricants. It is no coincidence that the “best” type of cervical mucus is called “egg white cervical mucus”. This is that type of mucus fueled by estrogen and released from the cervix of the woman right before or during ovulation, when it is the best time to conceive. Often, women who monitor their ovulation cycles will consider having this type of mucus a sign of an impending ovulation. The reason why raw egg whites are preferred as natural lubricants is that they have almost the same consistency as the female mucus, and are absolutely harmless to the sperm.

Another natural lubricant which can safely be used by couples who are trying to conceive is also a common household item – olive oil. Olive oil is all natural, and actually has the perfect pH balance, which doesn’t hurt the sperm. 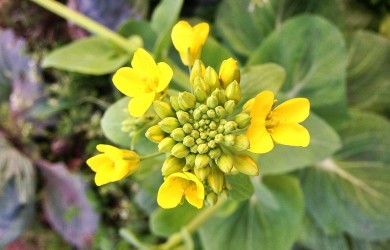 Canola oil comes from the seeds of the canola plant.

Canola oil is another suitable natural lubricant. Not only is it safe for the sperm, but it is safely absorbed by the body without a risk of infection for the woman.

Coconut oil is yet another alternative to the harmful lubricants. Coconut oil is also sperm-friendly and is also considered a natural antifungal, which actually makes it one of the healthiest options for lubrication for couples who are trying to conceive.

As weird as it may sound, another alternative is plain yogurt, which is also safe both for the sperm and for the uterus.

If the couple doesn’t want to resort to the kitchen cupboard to get safe natural lubricant, then of course the option for using saliva is also open. Saliva of course is natural, easily obtainable, and won’t stop the sperm from reaching the egg.

If these culinary and alternative options seem a bit weird for the couple, there are of course lubricants which are especially designed as “sperm-friendly” and safe for couples who are trying to conceive. They are made based on special tested formulas, which ensure that their pH levels are right to create a safe environment for the sperm to swim to the egg and fertilize it. Some of the latest natural lubricants actually mimic the natural female cervical and vaginal fluids, and create a sperm-friendly environment in the woman’s body.

It must be noted though that some of so called water-based lubricants, which are available on the market and claim to be sperm friendly, have been found to somewhat hinder the motility of the sperm, because they actually interfere with the pH levels of the female cervical mucus and fluids during ovulation.

Probably the worst lubricants which should be avoided by couples who are trying to conceive are the oil-based ones (baby oil, Vaseline, etc.) – these are not only bad for the sperm, but can also cause bacterial and yeast infections in the uterus.

So, when trying to conceive, all couples should keep these simple tips in mind, in order to increase your chances of conceiving a baby.