Originally from India, Withania somnifera is also known as the Indian ginseng, even though it has nothing to do with Ginseng. The analogy is because of the similar aphrodisiac qualities the two herbs have. 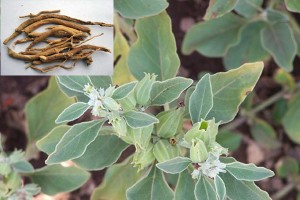 The root of the Withania somnifera herb is a popular remedy used by Ayurvedic medicine. It boosts sexual performance in men, and is especially helpful as a libido booster for aging men.

The Withania somnifera supplement is also a natural remedy for panic attacks and disorders and other stress related conditions. It helps relieve stress and promotes relaxation plus an increased libido.

This Indian ginseng also increases fertility in both men and women, so it is commonly used as a compound in the natural fertility boosters and sexual enhancing substances available.